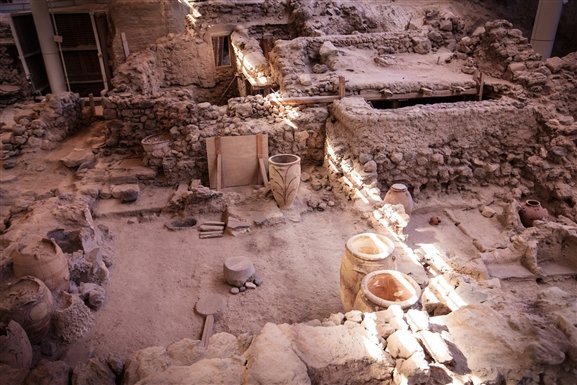 This fascinating archaeological site was first discovered in the late 1860s but its buildings date back to earlier than 17th century B.C. This former Minoan outpost, which, according to the Greek Ministry of Culture, is considered one of the most important prehistoric settlements of the Aegean Sea, was once a thriving port town. The city was later destroyed by a massive volcanic eruption, the same one that made Santorini look like it is today. Thanks to years of excavation, enough of the site has been uncovered (only one-third of the site is said to have been excavated) to allow visitors to explore. Here, travelers can look at multi-level buildings, loads of pottery and even drainage systems. What is absent, however, is any sign of its former residences. This has led scientists to believe that Akrotiri’s previous inhabitants knew of the eruption and fled the island accordingly.